At first I didn’t tell anyone I was writing a novel. I was super embarrassed about it.

Now, I’m like, “Ef you embarrassment!” and I punch my embarrassment in the face and now everyone knows I’m doing writing things.

Actually, telling people has only boosted my confidence and I’ve gained so many writing friends who have helped me along the way since I started talking about my writing. Woot!

Every event in your novel is just the news unless your main character has an opinion on it.

Any event becomes 1000X more dramatic once your main character has an opinion on what is happening. 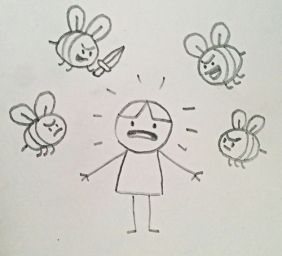 When I was 8, I pushed my thumb into a dead bumblebee’s butt-dagger. It hurt like bloody hell, but I didn’t shed a tear.

Under their cute, fuzzy, “we’re nicer than wasps” PR BS, bees are horrible, soulless insects filled with pain poison, ready to drain it into anyone that crosses their path.

In India, they even make bee fences around their crops. When an unsuspecting elephant touches a trip wire strung to a hive the bees come out and harass the poor guy.

However, I conducted my weird dead-stinger experiment for a reason. When I was 6, I had a run-in with a street gang of 27 bees. I needed to prove to myself that I wasn’t afraid of bees any longer, dead or alive.

Two brothers wearing hand-me-downs from a “cousin” they never met hiked along the Grand River. Both sported bowl-cut haircuts parted in the middle just like their buck teeth. TJ (me), the younger of the two was looking for something to bring with him for show-and-tell the next day. Their father was far off, fishing for cod, while they chased snakes in the grass, frogs into the water, and were a terror to all living things in their path.

“Hey TJ, gimme that walking stick,” said Tiggy. He was two years older than his brother.

“Okay, but only if you give it back,” said TJ, he knew Tiggy was stronger than him and would take it anyway.

Tiggy ran ahead and swung at the bulrushes like a machete. “Yah, yah, yah!”

“Can I have it back yet?” called TJ. He stood beside a big rock that he wanted to pry up. There might be a salamander underneath he could take for show-and-tell.

“Nope you dope,” Tiggy called back.

TJ pouted, but ran after him. Soon the two came to a dirt cliff that rose high above their bowl-cut haircuts.

“Watch this,” said Tiggy. He aimed at a hole in the cliff and jabbed the stick inside. It was a perfect javelin throw and Tiggy raised his arms like an Olympian.

“Now it’s mine again,” said TJ, yanking the stick from the hole. Tiggy shrieked and ran away.

An angry buzz filled the air.

“Tiggy, where are you—ow!” TJ clasped his arm. Something wriggled under his hand and a hot, sharp pain developed. He looked at the hole in the cliff and his eyes bulged like those dollar-store squishy balls.

“Hello?” asked the bees. “Did an elephant just destroy our home?” They looked around and saw no elephants, but a human child stood before them with the bowliest cut they’d ever seen. He returned their greeting by swatting at them.

“That’s not nice!” replied the bees and they dove straight for him, like little bulls, to a red cape.

TJ ran into the river, where the safest thing would be to hide under water. Unfortunately nobody told TJ this, so he stood there up to his waist like an advertisement. He was afraid to go further into the rushing water, and afraid to go back to shore.

“There’s that dumb kid!” said the bees. “What a dim-wit, he’s not even submerging!” And they danced around TJ like a Broadway number.

Then, all at once they went in for the kill.

They dove at TJ in full kamikaze style.

Little TJ had never known such pain. He cried and cried, while the bees pelted him with their butt-daggers.

TJ’s father finally came running up the river path, followed closely by Tiggy. He grabbed TJ and swiftly carried him away.

When TJ got home, his mother gave him a bath and picked out the dead bees clumped in his bowl-cut hair. Together they counted his stings and the next day he presented 27 red spots for show-and-tell.

Two years passed and little TJ was crippled with bee fear. He hated being in nature and his mom had brought him to a park. He was worrying about getting stung when he came across a dead bumblebee lying in the grass. He shrieked and wanted to run, but a comforting voice whispered to him.

“Overcome your fears, little one. You’ve been through the bee gauntlet and survived.”

TJ looked up and saw his future lanky self floating before him in a heavenly vision. His skin was creamy and pure as a freshly picked peach. Not a single bee sting could be seen on him.

TJ realized that bees had nothing on him. He’d been through the bee gauntlet. He’d endured the wrath of 27 bees and survived. He would grow up into a big lanky man one day and it was his choice to not let bees bring him down.

“I will do it!” cried TJ in his most heroic voice. He hadn’t hit puberty yet, so his voice was high-pitched and squeaky.

“Fuck bees,” said TJ and pushed his thumb into the dead bee’s stinger.

It’s been 20 years since the day I overcame my fear of bees. If you still have a fear of bees, go intentionally sting yourself.

If you don’t want to do that (and continue to live in bee fear), here are my personal sure-fire ways to avoid bee stings.

2. Don’t swat at bees right after destroying their hive.

5. Don’t push a bee’s stinger into your skin on purpose.

I also did some research and found the following tips from the internet. I’m not sure how much they’ll help, since none of them helped me.

I know humans love smelling like flowers, but sometimes it’s okay to just smell like a human. If you smell like a flower, a bee will try to sex you up with its butt-dagger, so unless that’s your thing, just stick to normal, human smells.

Apparently smelling like a human isn’t good either, because sweaty humans smell like bears. Bee children watch cartoons about Winnie the Pooh stealing all their hard-earned honey, so they hate anything that looks or smells like bears.

8. Wear a hat. Bees are conditioned to think hairy animals will steal their honey.

This is another bear instinct. Apparently your hairs reminds bees of bear hairs… I actually think bees just hate humans and bears are an excuse.

Just like people, bees also avoid goths. This is a fact. If you want to live your life sting free, adorn the black. [NOTE: I have since been notified that bees will actually think you’re a bear if you wear all black, so perhaps wear nothing at all. Just go outside nakey!]

10. Blow on a bee. This makes the bee think it’s windy and it will fly away.

Bees hate a lot of things. Bears (humans), goths, and wind. If you see a bee near you, go pick it up and blow in its face. Take that little bee! This is smart advice.

If you want to step on a bunch of bees, don’t do it barefoot. Make sure you wear some shoes with spikes on them. This will aid you in squishing those mean bees.

12. Don’t use power tools around bees.

The vibrations and noiseations of your power tools will anger bees. Bees hold the world’s title for busiest creature and will take down anything that tries to be busier than a bee. Go back to cutting your grass with scissors. Turn that screw in manually. Use a hand saw when cutting that wood. Stop being more productive than a bee.

Overall, there’s one thing that I’ve learned from all my stinging experiences that has guaranteed me a sting-free environment every time I’ve done it.

I simply lock eyes with it and whisper the words, “Fuck off, bee.”

Bees got nothing on me.