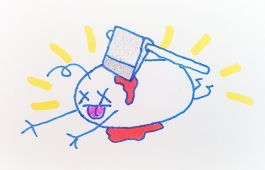 If you think the first chapter of your novel could use some improvement, there’s one simple test that can tell you how to make it better.

Kill the main character at the end of your first chapter.

This will tell you how compelling your first chapter is.

Write something like, “Jim slips off the bridge and falls to his death.”

Now your main character is finished. He can’t achieve any of his goals.

Next, list out all the consequences that come into effect since the main character can’t achieve their goals.

If the list is short and lacklustre, it’s a good sign that your first chapter has room for improvement.

The consequences matters because they give the reader an idea of what’s at stake. The larger the stake, the more compelled your reader will be to find out what happens next.

A great example is Katniss Everdeen from Suzanne Collins’ The Hunger Games.

Let’s kill her at the start of the novel and see what happens.

“The train to District 1 crashes and Katniss Everdeen dies.”

Now what consequences come into play if Katniss can’t accomplish her main goal?

The consequences of Katniss’ death are very high and the reader doesn’t want any of those things to happen. The reader eagerly turns each page to find out what happens next, because Katniss must accomplish her goal above all cost.

A great thing about this test is that you can keep killing your main character at the end of each chapter to see if the consequences are still high enough to keep the reader engaged.

As in The Hunger Games, each chapter proves to test Katniss’ ability to survive and raises the consequences even higher:

A lot of emerging authors don’t realize that the consequences must be clear from the start. It’s why most first-time novels don’t make it. It’s why mine didn’t.

When I finished my first novel, The Moon King, I used the first few chapters to introduce the setting, characters, and the main character’s goal, but I didn’t spell out the consequences until later chapters.

The initial feedback I got was very telling. It was to the effect of, “The first half is boring and drudges along, but the second half is super exciting and I couldn’t stop reading.”

Now that I’ve learned about building up consequences right away using the “Kill the main character” test, I’m editing my first few chapters to be much more compelling.

If you think that your first chapter could use some improvement, simply kill the main character and list out the consequences that you’ve written about so far.

If there aren’t many, or they aren’t very high, then you may need to do a rewrite.