Unicornado – noun
A portmanteau of the words UNICORN and TORNADO to imply a disastrous fury of destructive unicorn power.

If you thought you thought you were a fan of unicorn literature before, you have no idea what you’re up for with the stories as gloriously disturbing as found in Christine Morgan’s Unicornado! Anthology.

We’re talking Unicorn Gore, Unicorn Destruction, and Uniporn (yes, that is a thing. If you’re not currently into uniporn, you’re not deep enough into unicorns).

So why am I talking an amazingly fetishistic collection of unicorn stories? Because I’m a contributing author to the work!

My story, Unicorn vs Rock Giant is one of 32 disgustingly ridiculous, yet fantastic stories about unicorns. And to give my completely biased review after reading all 32 stories… YOU NEED TO FORK OUT SOME MONEY AND BUY THIS BOOK NOW! Believe me (also believe in unicorns), you won’t regret it. You’ve never read such a disturbing collection of unicorn stories in your life and likely never will. This book is truly one of a kind, even more rare than unicorns themselves, AND THEY DON’T EVEN EXIST! 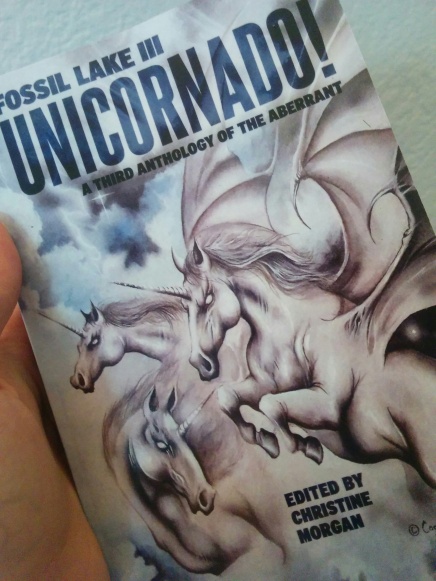 What other book are you ever going to pick up, and read an author description that only says, “Nikki Guerlain is classy as fuck”? Never. And you know what, I read Nikki‘s story, and she is classy as fuck.

So, if you think you’re into unicorns… I mean REALLY into unicorns, like borderline obsessively in love with unicorns, then this book is PERFECT FOR YOU!

GO, GRAB A COPY NOW and be changed for life!

Ah, the unicorn. Symbol of purity, wonder, magic, and pretty little princesses everywhere. Nothing scary about unicorns, you might think. Nothing dark, gothic, or hardcore. But you’d be wrong. You’d be very, very wrong.

Gathered here for your twisted pleasure are thirty-two works of unicorn weirdness. From the fantastic to the macabre, packed with savagery, blasphemy, gore, and sex, this is no book of bedtime fairytale stories for kids. This is a book of hooves and horns and horrible destruction.

It’s a storm. It’s a stampede. Brace yourself for the